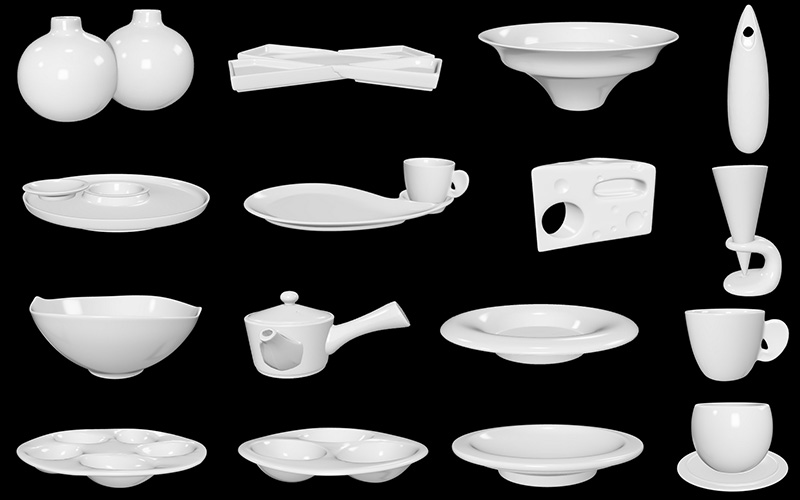 Steampunk Digital took on the challenge of creating a 3D version of porcelain by WANKOUBOU; Hasami-yaki is a white, glossy and uniquely shaped ceramic.
Hasami-yaki is a traditional Japanese porcelain that has been produced for 400 years near the town of Hasami in Nagasaki Prefecture, which is characterized by its beautiful white surface.
Traditional Hasami-yaki is still a popular porcelain, but is facing a decrease in the number of artisans due to the aging of craftsman, and the cancellation of pottery markets and sales events due to the new coronavirus. The project was launched with the aim of getting young people more interested in Hasami porcelain through new ways of displaying the products, such as observing the porcelain 360 degrees in a 3D viewer and checking the actual size in AR mode. In this way, WANKOUBOU aims to maintain the tradition of Hasami porcelain and revitalize the region in the future.

The 3D porcelain will also be made available on the e-commerce site (internet sales) in the future and will be used to create a new shopping experience where users can browse the products in any direction. There are several methods of 3D scanning, and the choice of method depends on the object at hand.

In the case of Hasami-yaki, there were a few major problems to overcome.

Many of the Hasami-yaki pieces to be 3D scanned are small porcelain, and the “Monocle Structure Scanner” app, which is best suited to 3D scanning of larger objects such as people, is not suitable.

So we started with the “SOL Scanner”, which is more suitable for scanning small objects and can capture the 3D shape with a laser and generate a 3D model with the exact size. 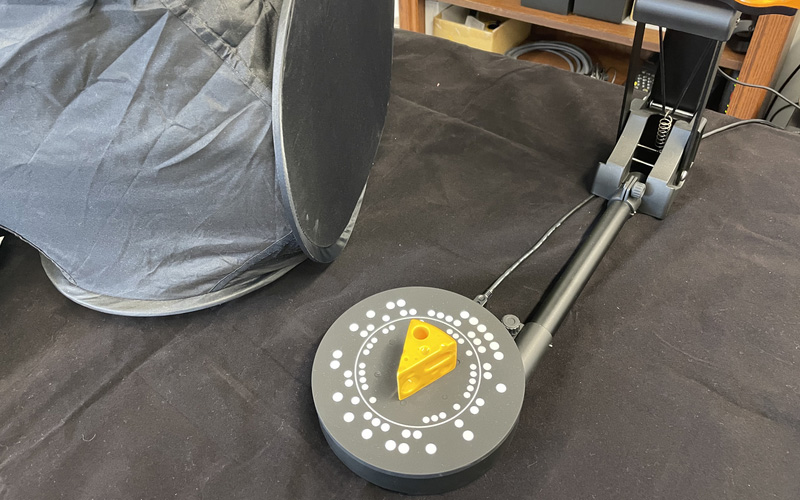 We tried to scan Hasami ware in 3D with “SOL Scanner”.

The “SOL Scanner” was covered and scanned three times in three different directions from the top and both sides in about one to two hours. Some porcelain scans produced accurate 3D models, but areas where the laser could not reach, such as deep holes in cheese or inside vases, did not scan cleanly and could not be reconstructed symmetrically. Textures also failed to look shiny or smooth. And some of the porcelain has near exact symmetry which confused the software.

We used some of the 3D data from the “SOL Scanner” as a guide for the subsequent clean-up of the 3D model, but we changed the scanning method to photogrammetric technology and tried again to get a better 3D result. The challenge was to reconstruct a 3D model using photogrammetric technology and used “Reality Capture”, which analyzes hundreds of photos taken from different angles by a camera and reconstructs the 3D model on a computer.

It is very difficult to reconstruct a 3D model of Hasami-yaki using photogrammetric techniques because it is white and smooth and has no feature points.

Therefore, we used a green and pink chalk to create random patterns all over the object to give it an adequate texture for surface reconstruction.

After the project is finished, the porcelain needed to be washed. To ensure easier cleaning we checked which materials work best for clean-up. The smooth parts of the glaze was coloured with green liquid chalk and the matt parts with pink powdered chalk. This combination made it easier to wash, and was highly visible to the photogrammetry software.

Photographing objects with the camera

Once the features have been added, we prepared a scale board to accurately size the model. We used the camera to take pictures around the object in three stages: top, middle and bottom. We kept the white balance fixed, well lit, and optimized the ISO for low noise.  The extra challenge was to be careful not to shake the hand, and focus on the inside of small holes and objects at close range.

Shooting is repeated in different orientations including; up, down, sideways and so on, as it was needed to take pictures from all angles of the object.

A folder is made for each of the three positions photographed and save on computer. A new file is created in “Reality Capture” for each angle taken in the three stages, and each photo folder is input for each.

After detecting the markers on the scale board, the software is able to combined the many camera angles; estimating each photo shooting position, field of view, lens shift and other details, and creates a point cloud representing the approximate 3D shape of the porcelain.

At this point we have successfully aligned the feature points with chalk of different materials, green and pink, on a white and smooth surface. Reconstruction is done by processing the point cloud data within the white frame box where the 3D model is to be created. Once reconstructed, a mask is created of the model for each of the photos used in reconstruction.  This masking enables fusing multiple photo sets together from different angles, without conflict from the surrounding surfaces.

After two or three models have been reconstructed from different angles, they are merged to form one model.

If the merge is successful, the three models created from different angles will be reconstructed as one model with 360° coverage! Using the photogrammetric model as a basis, we modeled it using “Blender” and created a texture, paying attention to the difference between smooth and matt areas. A total of 43 models were uploaded to Monocle Cloud, a 3D cloud service developed in-house, which allows users to view the porcelain 3D models from 360 degrees in an online 3D viewer, as well as in AR mode on smartphones. 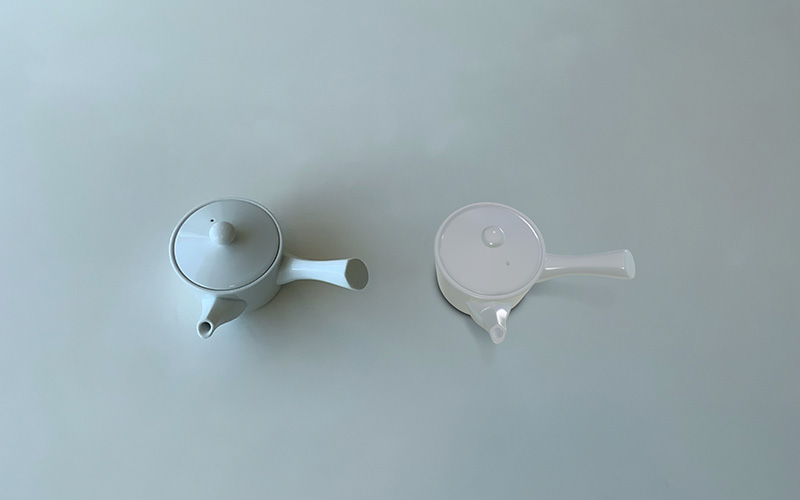 We’ve put a real Hasami-Yaki and a 3D model of AR next to each other!

Can you tell which is the real thing?

The 3D model can now be viewed on the website as a 3D EC, allowing you to see the actual size of the product and all the details that are not visible in the pictures, in greater detail before you buy. 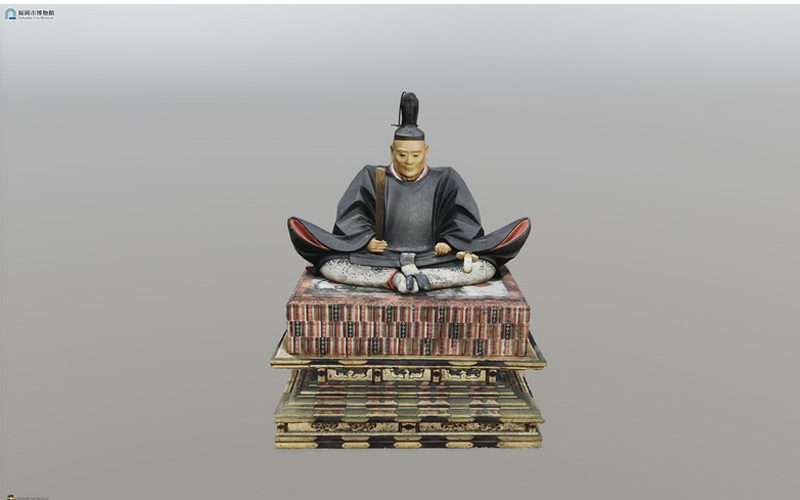 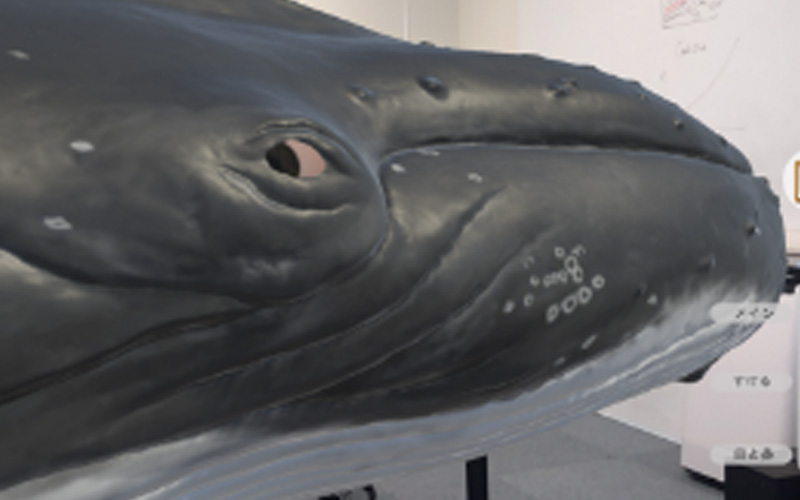 If you have a question about anything,
please feel free to contact us!
We are happy to contact with you.